Agriculture and the Welsh language

This is one of three articles scrutinising the link between three specific sectors of the economy and the Welsh language. Here, we will look at the relationship between the agriculture sector. Interestingly, there has been media coverage recently of the family farm, and its role in supporting the Welsh language. The Ffermio programme presented the family farm as a front line in the battle to save the language, while the BBC focused on the Welsh Language Commissioner’s comments about the need to support small family farms. The call was placed in the context of the government’s efforts to achieve its goal of a million Welsh speakers by 2050.

The census proposes that 43% of agricultural workers speak Welsh, a percentage well above the average within the general population. Some overlap between farmers and Welsh speakers should be expected as areas where the percentage of Welsh speakers is high tend to be rural areas as well. It must also be remembered that relatively small percentage and numbers work in the agriculture industry nationally. The sector contributes to the creation of 3.62% of the country’s employment and 0.59% of our GVA, and around 53,500 who work in the agriculture sector in Wales – so around 23,000 are Welsh speakers.[1]

But what is the relationship between the sector and the Welsh language? Is supporting and growing the sector going to have a positive impact on the number of Welsh speakers?

Wavehill and its partner JP Consulting recently scrutinised this in Gwynedd. Initially, it must be noted that the data available for employment figures in the agriculture sector are very variable, particularly the most recent estimates obtained by ONS. However, it is possible to draw on data back to the 1960s in order to scrutinise the relationship between the sector and the Welsh language.

The data are presented in the table below, and regression analysis proposes notes that there is no relationship between the two i.e. employment in the sector does not affect the number of Welsh speakers. 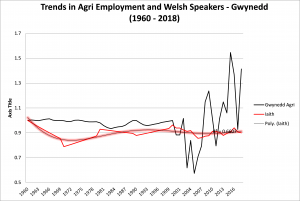 But that does not mean that there is no value to the sector, and it is certainly not an argument against supporting the sector.

Although the sector does not directly support the number of Welsh speakers, the industry is part of the infrastructure and foundations of Welsh rural communities. The cultural link between the land, the people and the language is an important one, and it is a link that the industry helps to create and preserve. This link is immeasurable in a calculation.

In particular, the social and cultural clubs and activities such as the Young Farmers, shows and agricultural markets create reasons and opportunities for people to use the language in their lives and work. The industry’s role in the imagination is also important, and the idea that rural, agricultural communities continue to survive is part of the ‘story’ we like to tell ourselves about the history and nature of the language and the country.

The data proposes that we should not raise hopes for the potential of the sector as a means of increasing the number of Welsh speakers. But it plays an important second-class role in the rural areas that many see as ‘heartlands’ or the ‘Fro’.

[2] Not to mention the challenge of growing the sector amid Brexit uncertainty.