Language and the Public Sector

The public sector has been a particular focus for language planners and commentators over the years, and many have emphasised how the public sector can create and offer “good jobs” – in this context, quite high-paying jobs, in a relatively deprived area or where average wages are low. Gwynedd Council also operates through the medium of Welsh and consequently, Welsh speakers are needed to fill these “good jobs”. It’s an ideal combination for language planners, where good jobs allow people to live and work through the medium of Welsh in Gwynedd. It also needs to be remembered that there has been an expectation from the Welsh Language Act 1993, that the sector develops and provides Welsh-medium services. We could perhaps expect a positive relationship between employment in the sector and the data for the Welsh language.

Wavehill and JP Consulting explored the link between the sector and the Welsh language as part of wider work. The findings suggest we should reconsider the nature of this relationship, and the role of the public sector as a tool to support the viability of the language. Data stretching from the 1960s to 2018 can be used to explore the link between employment in the sector and the Welsh language, a portion of which is presented in the table below. 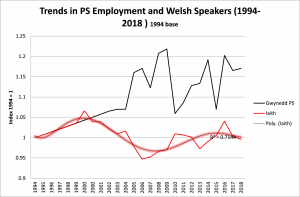 Interestingly, going back to the 1960s shows that there is no historical link between employment in the sector and the numbers of Welsh speakers.[1]   But if we focus on the data from 1994, after the Welsh Language Act, the relationship is considerably stronger up to 2001 but weakens thereafter. In rebasing the data from 2003-2018, we then get a clearer picture of this tendency for the relationship between the public sector and the language to weaken. More work and analysis is needed to try to develop an explanation of this, but it can be proposed that the public sector has grown, and continued to grow since the 1990s, but perhaps growing faster than the capacity of the Welsh-speaking labour market i.e. there are more jobs in the public sector than there are Welsh speakers who apply or are eligible for the posts.

A regression analysis of the period 1994 – 2003 also proposes that there is a negative coefficient i.e. employment within the sector during this period has a negative impact on the language. This is unexpected, and instinctively it’s difficult to accept, but the relationship is there in the data.[2]  Explaining the negative relationship between the sector and the language is difficult, and the main conclusion of the work must be that there is a need for research and data to better understand this relationship. But it is also worth considering the following factors when beginning to explain the data;

– Perhaps the rate of increase among inward migrants and the numbers who cannot speak Welsh here is higher than the increase of Welsh speakers secured through employment in the sector.

– Education is not part of the public sector data analysed here (there is separate and specific data for education). The sector is likely to be a key important factor supporting the viability of the language.

But to close, as we try to understand the exact relationship between a sector of the economy and the language, we may ask a fundamental question that links many of the recent blogs on this site; is there a significant relationship between language and employment? The data generally suggests a weak relationship at best, and one that can be negative at times. A further possible conclusion is that wider factors are much more important in affecting the numbers and percentage of Welsh speakers living in an area.

Take a look at the rest of the series’ blogs that discuss the relationship of the Welsh language with different sectors:

Agriculture and the Welsh language

The effect of Tourism on Language in Gwynedd

The importance of shopping local to rural communities →
Share This